Saint Columban (also referred to as Columbanus, Columban of Luxeuil, and Columban of Bobbio) was an Irish-born missionary who lived from the year 543 to 615. His birth was amid the time of the fallen Roman Empire and the year of the death of St. Benedict of Nursia.  A few facts about him:

His patronage was recommended for the parish church in Yelm, inheriting the congregation of  Saint Margaret Mary Church in McKenna.

Read more about him here. 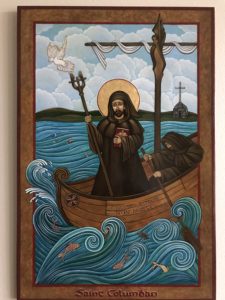