Welcome to the St. Columban Choir!

If you are interested in being a Cantor or you play an instrument at an intermediate level or better, please email parishoffice@saintcolumbanyelm.org or speak with the Organist after Mass.

Join us for practice Tuesdays at 6:00PM

These Alone are Enough
Alleluia, Sing to Jesus 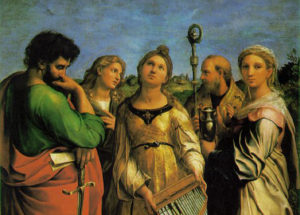 With many of the early church martyrs, there are often stories and legends but not much historical information. Saint Cecilia probably lived in the second or third century, and tradition says she died about 177 AD. Although details of her life may be unknown to us, Saint Cecilia was one of the most revered early virgin martyrs of Rome, as evidenced by her name appearing in the Roman Canon of the Mass (Eucharistic Prayer 1). She is one of the seven women commemorated by name in the Roman Canon. There is evidence of a church named in her honor dating to the late fourth century. A feast day in honor of Saint Cecilia was celebrated as early as 545.

Cecilia was born in a wealthy Roman family and was a Christian by birth. Her family gave her in marriage to Valerius, a pagan nobleman. Cecilia promised to remain a virgin, and she was successful in persuading Valerius to respect her virginity on their wedding night. Later, Valerius was converted to Catholicism along with his brother, Tiburtius.  These two brothers dedicated themselves to burying the Christian martyrs, which was illegal. They were arrested and sentenced to death for refusing to renounce their religion.

Cecilia continued the work of converting people to the Christian faith and of burying the Christian dead, even though it was against the law. Hundreds were baptized through her witness and strength of faith. She planned to have her home preserved as a church after her death. Her refusal to worship false gods and her burying of the dead lead to her arrest.

Saint Cecilia was brought to trial and sentenced to death. It took several days for her to die, and it is said that she converted many people who came to care for her as she was dying. Saint Cecilia died lying on her right side with her hands crossed in prayer. The position of her fingers—three extended on her right hand, and one on the left—were her final silent profession of faith in the Holy Trinity, Three Persons in one God. Saint Cecilia was buried in the Catacomb of Saint Callistus.

In the Middle Ages, Saint Cecilia became a very popular saint. She is remembered today as the patron of musicians, composers, instrument makers, and poets. There is a story that Saint Cecilia was said to have heard heavenly music inside her heart when she was forced to marry the pagan Valerian. During her wedding, Cecilia sat and sang to God in her heart. Thus, she was declared to be the patron of musicians. Musical compositions, poems, art, and festivals have grown out of this story.

Saint Cecilia reminds us of the ways that our music and art can lead us to praise God.   Saint Cecilia Pray for Us!

Typically sung after Communion has been distributed, known as the Post Communion Reflection(PCR).

Sung from Easter through Pentecost

Queen of heaven, be joyful, alleluia; because he whom you remitted to bear, alleluia; has risen as he said, alleluia; pray to God for us, alleluia.

Sung from after Pentecost up to the 1st Sunday of Advent.

Hail, Holy Queen, Mother of Mercy, our Life, our Sweetness, and our Hope.  To thee do we cry, poor banished children of Eve.  To thee do we send up our sighs, mourning and weeping in this vale of tears.  Turn then, most gracious Advocate, thine eyes of mercy towards us, and after this our exile, show unto us they blessed fruit of thy womb, Jesus.  O Clement, O Loving, O sweet Virgin Mary.

Loving Mother of our Savior, who are forever the gate of heaven and star of the sea. Help all your children who through falling, seek to rise again.  You brought forth your own Maker while all nature wondered.  You were ever a virgin, before and after you received from Gabriel that first solemn "Ave".  Have mercy on us sinners.

Hail, O Queen of the heavens.  Hail, O Lady of the angels.  Hail, root of Jesse and the portal from which the world's true Light is risen.  Rejoice, O glorious Virgin, O fairest of all creatures.  Farewell, O most lovely one; pray for us to Christ, our Lord.

Here at St. Columban we use the third edition of the Journeysongs hymnal from OCP.  You will find the hymn numbers for those being sung during Mass listed on the hymn boards.

For the readings during Mass we use the third edition of the Lumen Christi Missal from Illuminare Publications and for our Spanish-speaking community we offer the Word & Eucharist (Palabra Y Eucaristia) from ILP.  You can find the page number listed on the hymn boards as well.

For Mass Propers such as the Responsorial Psalm, the Gospel Acclamation, and the Entrance and Communion Antiphons, choir members use the Lumen Christi Series also by Illuminare Publications.