A history of the Catholics in the Nisqually Valley and South Thurston County.

In 1911, Mrs. Joseph Daily asked Father DeDecker, the priest who had charge of the Nisqually Indian Church near Roy, Washington, to come baptize her baby daughter. Again, in 1912, she asked Father Mally of Olympia to baptize her baby boy. She then found that there were several Catholic families in the area and wrote Bishop O'Dea in Seattle, asking for a priest to offer Mass for them occasionally.

On Saturday, June 28, 1913, Father M. Kreutzer from Tacoma said Mass in a hall above the barbershop in McKenna. This Mass continued to be offered once a month for the entire year. When Father Kreutzer was no longer available to come to McKenna for Mass, Mrs. Dailey wrote the Jesuit Fathers for a priest, and they suggested she ask St. Martin's College for a priest to come to Yelm. In January 1915, Father Matthew Britt, O.S.B. from St. Martin's in Lacey began offering Mass on the last Sunday of each month in the same hall formerly used by Father Kreutzer. In March 1916, Father Raymond Neary, O.S.B., also from St. Martin's was given charge in place of Father Matthew Britt. At this time the congregation fluctuated between ten to twenty people.

In those days automobiles were not common. Therefore, Father Raymond Neary boarded a train in Lacey, traveling to Tacoma where he boarded a train for McKenna. The train trip took from Saturday morning to Saturday afternoon. He spent the night as a guest in the home of one of the parishioners. The next morning he offered Sunday Mass and then made his way back to St. Martin's in Lacey again by train.

A New Church is Born

In 1921, an application was made to the Extension Society through Bishop O'Dea for $500 to assist in building a church in McKenna. THe money was obtained with the stipulation that the church be named after St. Margaret Mary.

St. Margaret Mary Church was built according to a plan loaned to the people by an architect. The superintendent of the McKenna Lumber Company obtained a 99 year lease on land from the lumber company where the church was to be built and also obtained the lumber from the McKenna Lumber Company at cost. The first Mass was offered in the new St. Margaret Mary Church on June 12, 1921.

Church attendance grew to more than 100 parishioners by 1923. St. Margaret Mary was used for 37 years until it could not accommodate the number of parishioners for lack of space.

This necessitated the purchase of a building to which to have Mass. Yelm was chosen as a site. On Easter Sunday 1958 Father William Maat, O.S.B. offerred the first Mass in a building which is part of a parish hall, formerly a garage, built by Barney Clark. Beginning in 1965 there were two Masses each Sunday in Yelm and one Mass at St. Margaret Mary in McKenna. In 1981 Mass was discontinued at St. Margaret Mary and all parishioners were then members of St. Columban Church in Yelm. The church building in McKenna was then sold.

From 1983 Fathers Edward Receconi, O.S.B. and Patrick Dahlquist, O.S.B. were interim priests who administrated the parish until 1984, at which time Father Terence Wager, O.S.B. was installed as pastor. In 1893, St. Columban parish building committee initiated plans for fundraising and for the building of a new church in Yelm, located on the same parish property not far from the old church. Groundbreaking for the new Church was in 1989, and the new church was completed in June 1990.

The Rite of Dedication too place on June 10, 1990, and was commemorated with a booklet. Archbishop Hunthausen consecrated and blessed the new church.

Father Wager continued as pastor until his death in early 2010. Archbishop Brunett appoint Fr. Duc Nguyen to the parish as priest administrator beginning in July 2010 and staying for three years, ushering in a new area of deepening volunteer commitment to our parish life and spiritual growth.

Blessed on November 23, 2020, the prayer garden reflects the collaborative efforts and donations from parishioners.  In conjunction with rebates from the Annual Catholic Appeal, a statue of St. Columban was purchased and installed.  This was later followed by a the installation of a paved pathway lined with donated bricks, forever memorializing both our current and former clergy, parishioners, and their families.

Work on the garden continues with plans to add Outdoor Stations of the Cross, a Privacy Fence, and Benches.  If you would like to purchase a memorial brick or donate a bench, please click on the link to download the order form and turn-in to the parish office. 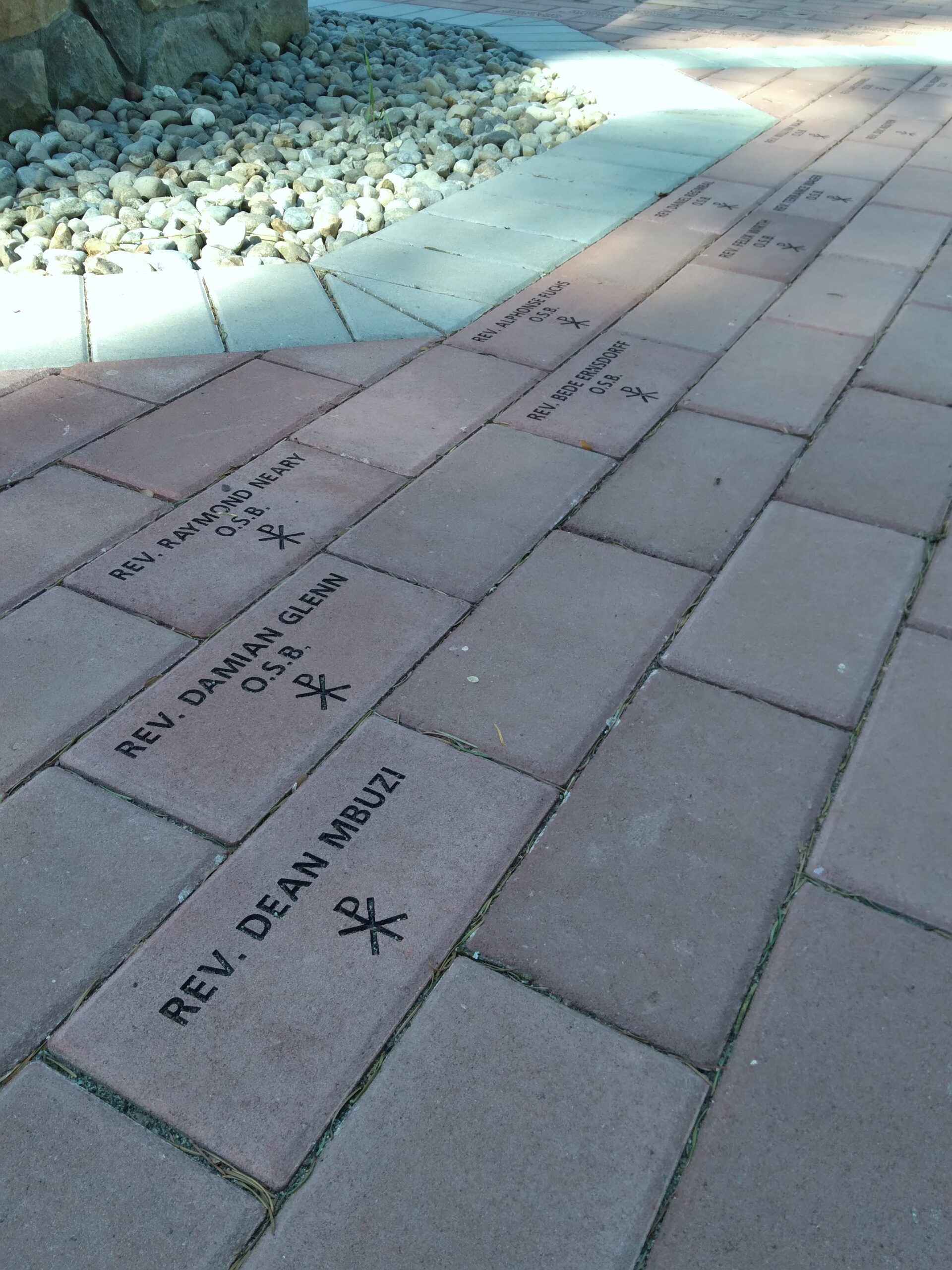